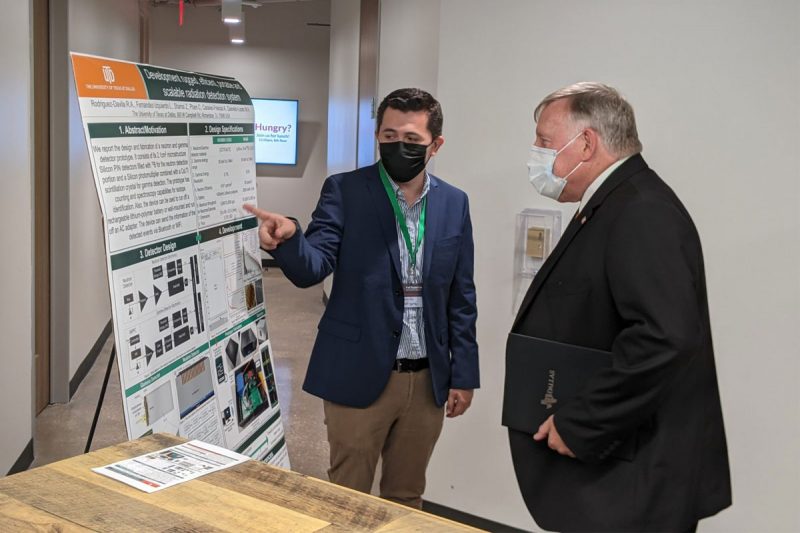 On September 28th and 29th, UT Dallas President Richard Benson led a delegation to Fed Supernova in Austin, Texas. Organized by Capital Factory, this event brought together hundreds of Department of Defense (DOD), corporate, and academic representatives to collaborate in improving our national defense. Over 1,000 more attended virtually.

The US Department of Defense and its various agencies, as well as groups from individual branches of the armed services (Army, Air Force, etc.) already provide significant funding for UT Dallas research.

The involvement by the UT Dallas delegation at the Fed Supernova last month was a significant step towards deepening relationships with defense industry principals.

Throughout the two days, university research teams exhibited in the first-ever Academic Alley, an academic-research-engagement program available to the attendees. UT Dallas was represented by three exhibits:

There was also a single exhibit from University of Texas at Arlington, one from the George H.W. Bush Combat Development Complex (TAMU), and one from Texas Christian University.

UTD’s deep participation in this event was enabled by the partnership that the university has with Capital Factory. UTD is the only higher education industry member of Capital Factory’s Innovation Council.

The event was an outstanding opportunity to meet many principal investigators, program managers, and other budget authorities from the defense department and military in a short amount of time. For more information about this event or Capital Factory, please contact Steve Guengerich.