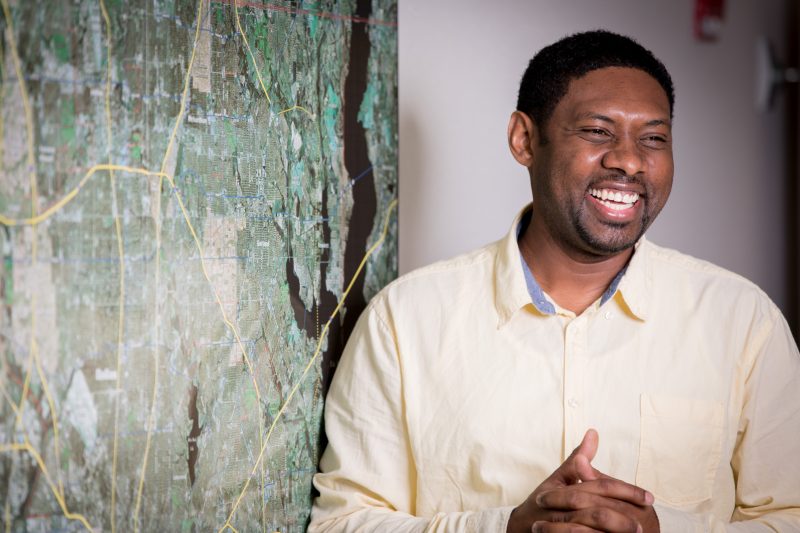 Descendants of the Old Forest

The son of peanut farmers, Dr. Anthony Cummings, assistant professor in the geospatial information sciences program at UT Dallas, walked the forests of Guyana, South America as a boy. In the tropics of the Caribbean, he learned to use a bow and arrow, and entertained the dream of becoming a professional cricketer.

While he pursued his education, he grew curious about the differences between his family’s farming practices and others. A need for fertilizer and constant maintenance to their land brought Dr. Cummings to the understanding that economics plays a key role in farming efforts, but there was something more interesting happening on indigenous lands.

It was amid the mountains, waterfalls, and diverse population of plants and wildlife that the seed to improve the livelihoods of the indigenous people was planted. But Cummings quickly realized that rather than bringing inputs for the soil from the outside, what he needed to do was help to document indigenous practices so that others can learn, as well. As an adult, he would return to Guyana, with his young daughter, to bring technology to help advance his efforts to understand indigenous peoples’ swidden agriculture practices and contribute to land conservation.

Since 2002, Dr. Cummings has worked with the Makushi people to cultivate research methods that combine a respect for their strong ties to the land, while embracing advancements in technology. Currently, his research in the School of Economic, Political and Public Policy seeks to track the decision making processes indigenous farmers make in growing crops and how their cropping practices influence carbon storage on their lands. He analyzes how their farming practices and land-use decisions are related to and impacted by larger global processes, including climate, trade, and human-environment interactions, and how these systems in turn impact their culture.

The Guyanese countryside that Cummings studies has remained isolated for much of its history and has therefore endured relatively little deforestation. Yet, these forests harbor some of the most valuable timber species, but because they are older and poor in plant nutrients, commercial agriculture is not most suited for these areas.  Instead, the Makushi people practice a well-timed and meticulous systems of rotation agriculture that involves growing their staple cassava, sugarcane and other crops and then leaving the land to fallow.

“I try to understand from their perspective what bits of technology might help them to improve their own livelihoods.”

First, Dr. Cummings must understand how the Makushi have survived on the land for as long as they have. He began his research by examining how farming plots transition from clearing harvest to successful production of crops. Dr. Cummings and his team track the process the land undergoes after the forest is cut and through to returning to the old-growth forest. The regeneration process of the old forest can be hindered by climatic change pollution, and soil erosion. For the Makushi, as well as future generations who survive on crops produced on this land, forest degradation has immediate effects on their daily survival, in addition to negative global ramifications.

Using unmanned aerial vehicles (UAV), or drones, Cummings works with a team of Makushi farmers to collect data on their farms. With these data, he analyzes changes that take place with the crops, as well as gains a better understanding of how farming techniques affect the ecosystem and wildlife. These changes can also affect the traditional approaches the indigenous people utilize on their land.

Guyana upholds some of the strongest forestry laws and one of the lowest rates of deforestation across the globe. Healthy forests, such as these, are important to Dr. Cummings’ research and the environment, and his quest to keep them intact. As trees use photosynthesis to convert carbon dioxide to food they act as a natural reservoir for carbon dioxide. Tropical plants are particularly effective at storing carbon dioxide and some of the most intact forests are found within indigenous lands.

“This is where my research comes in…beginning the process of helping them develop maps of their forest and help them understand how much carbon there are storing.”

In June 2009, Guyana began implementing its Low Carbon Development Strategy (LCDS) in collaboration with The United Nations Reduced Emissions from Deforestation and Degradation (UN-REDD+) program. The main goals of the program is to achieve “greater economic and social development”[1] in Guyana and address climate change through low carbon development in developing economies. It is important to note that forests not owned by the state, such as the farmlands the Makushi maintain, cannot participate in the program to generate revenue unless they have a means to measure their forest and are explicitly invited to participate in the program by the state. The Makushi and other indigenous peoples in Guyana own their forests exclusively and can decide how they want to use it. As part of Dr. Cummings research aims to work with the Makushi to quantify how much land they have under cultivation of various crops, the areas under various ages of fallow, and how much carbon is stored at the various stages of vegetation growth. Through developing the tools to map their lands with the Makushi, his research will allow them the opportunity to take part in the LCDS program.

Dr. Cummings work also includes measuring how changes in global economic conditions, such as an increase in the price of gold, translates to human-big cat conflict within and adjacent to indigenous lands. The fluctuation in gold prices changes the forces of demand and supply, with increased prices sending more gold miners into the sparsely populated places, including indigenous community areas. Dr. Cummings is tracking how the movement of people into indigenous influenced landscapes affect wildlife – often their killing. He is also studying how the movement of people from coastal Guyana changes the distribution of crime away from traditional hotspots along the coast and into the forests. These data can help guide the Makushi to better understand what changes to expect in their environment.

Whether he is reviewing research data at UT Dallas or working abroad, Dr. Cummings is never far from his homeland. While traveling, he has been able to share his experiences with his daughter, Aria, who discovered a fondness for mangoes among the forests he walked as a boy. When he isn’t dedicating his time to preserving landscape of Guyana for future generations to enjoy, he participates in marathons and a favorite pastime of his youth: the cricket matches in England, India, and the Caribbean.