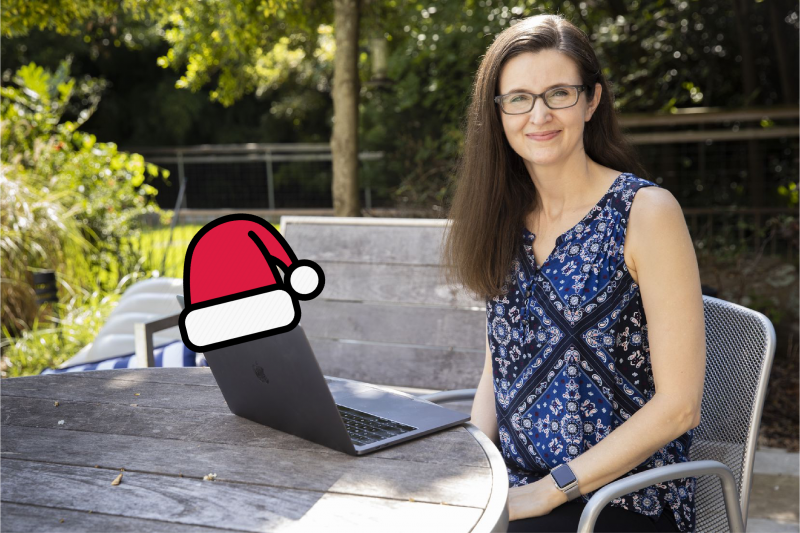 Dr. Candice Mills, Associate Professor of Psychology in the School of Behavioral and Brain Sciences, conducts research examining how children learn from others. Dr. Mills aims to characterize these developmental changes in children to advance ideas on how to best encourage thinking and learning abilities. A new line of work in her lab examines how children think about fantastical beings like Santa Claus.

Can you briefly describe your research?

This particular research project is focused on how children discuss Santa Claus with their parents. We know that many children believe in Santa Claus, and then at some point, their beliefs shift, and most adults don’t believe in Santa. We think he’s often a great tradition, but not that he’s a real individual person who does all these amazing things. Understanding how children transition from trust to skepticism is a hard thing to study.

If you ask kids how they became skeptical of Santa, some of them have really great stories about how that happened, and others don’t. Others keep it a secret from their parents until they’re adults. It’s hard to get the process in action. With this particular study, we’ve been interested in how parents report the conversations they’ve had with their children over the holiday season. We can go back and code those conversations for the types of questions kids are asking and then watch them go through the process of trust to skepticism, allowing us to catch that transition in the act.

How has COVID affected your research?

I can answer that in two different ways. The first is how this project got started. My collaborator at George Mason University, Thalia Goldstein, and I had been talking about how to capture the process of children transitioning from trust to skepticism about Santa Claus. Meanwhile, UT Dallas was sending daily health checks over text messages that we used to report whether or not we had any COVID symptoms. I appreciated that UT Dallas made it so easy for people to provide this information over text, and then I started thinking about how we could do something like that to capture a parent-child conversation. So inspired by UT Dallas’s daily health checks, we created our own similar system to send parents text messages twice a week during December to share short surveys about their experiences and conversations with their child about Santa Claus during the holiday season.

The other way COVID has influenced our research is what’s actually happening with families who are participating in our studies. Parents have reported that some of their traditions about Santa had changed due to COVID making things challenging; for instance, some weren’t going to meet Santa in person the same way they might have before. Interestingly, parents tended to find lots of other ways to give their children experiences with Santa. They weren’t getting quite the same level of interactions directly, but they were often looking at other ways to give children a Santa experience. Some parents were Skyping with Santa or using an app where you can put Santa in your living room. In other words, COVID was influencing how families were experiencing the holidays, but they still reported other activities and traditions to bring Santa in their house over the holiday season

What resources and/or support at UTDallas make this research possible here?

We have been using REDCap in conjunction with Twilio. Twilio is a third-party service that allows users to send survey invitations from REDCap to participants as text messages. Within REDCap, we created an initial consent form, an information sheet to securely gather parent phone numbers, and two surveys per week for the month of December. Once parents filled out the information sheet, we could set up a link between Twilio and REDCap so that parents would receive a text message twice a week that linked them to a secure website to fill out our REDCap survey. So we have this massive, massive amount of data on parent-child conversations thanks to Twilio and RedCap working together. Danny Gonzalez, who is a Research Technology Support Lead, helped tremendously as we set up this project.

What impact do you see your research making on the future

Belief in Santa Claus is widespread in our culture, but it can be hard to measure how children change from trust to skepticism outside of asking people to reflect back on their experiences as children. So by using new technology, we are able to get information about how children talk about Santa in ways that just haven’t been possible in past research. But we are also interested in shifts from trust to skepticism more broadly. Even as adults, there are times when we believe something, and then gradually our beliefs change and we might end up being skeptical about it or change our perspective. Understanding the different trajectories children take from trust to skepticism, as well as how abruptly or continuously this transition happens, can provide insight into trust and skepticism more broadly.

What is something great that you have discovered in conducting this research project?

One of the things I found really interesting is just how much of the time children are completely in the Santa myth and not at all skeptical. They end up asking a lot of questions about Santa that are showing such full and complete belief in Santa. Is Santa going to be here at 2 am or 4 am? Can I get my list of presents to Santa to change something? In other words, children frequently ask questions that are coming from the perspective of immersion within the Santa myth, not questioning it.

For most children, the shift from trust to skepticism is a gradual process. In some cases, they start recognizing scientific or conceptual gaps in the Santa myth, like how Santa fits down small chimneys or travels around the world in one night. In other cases, they make observations about the things they’ve seen that don’t all add up about the Santa story. Like, I think I saw the wrapping paper that Santa uses in your closet, or why does Santa look different at the mall than he does on TV? And parents respond in many different kinds of ways to children’s questions, from deflecting them by asking kids what they think to referring to magic in general to coming up with really specific answers to children’s questions. Interestingly, since our reports are over time during the same holiday season, we can see that a child might ask a skeptical question one day and then be back fully immersed in the myth the next day. So there’s an interesting tension between them being in the myth and them chipping away at it.