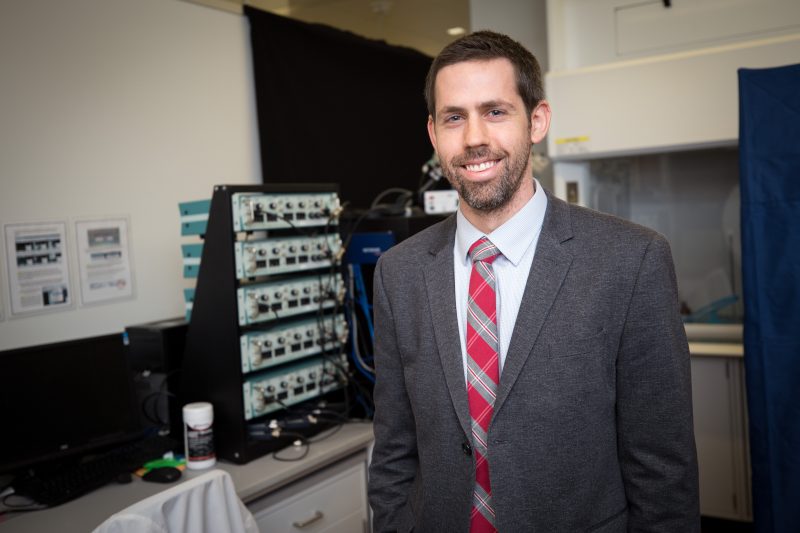 There is a famous poetic line from Tolkien’s The Lord of the Rings which addresses the Rangers of the North and the Rangers of Ithilien: “Not all those who wander are lost.” Thought to be vagabonds, the Rangers true identity revealed them to be great hunters and warriors. Through their sharp sense of the world around them and their ability to understand the language of the wild, they were able to protect their respective lands from harm.

While Tolkien’s tale is filled with both mystic and myth, Dr. Seth Hays—assistant professor at UT Dallas who holds degrees in biomedical engineering and neuroscience—has similar correlations in his own research-driven narrative.

“The article focused primarily on recovery after stroke,” he shared with us, “but one of the big pushes of my lab is to develop this for other disorders, as well.”

WHAT IS THE VAGUS NERVE

The vagus nerve—or wandering nerve, as it is known in Latin—is the longest nerve of the autonomic nervous system and tenth pair of cranial nerves. Referred to singularly, this nerve travels through the neck to vital organs in the thorax and abdominal area.

“…One of the big pushes of my lab is to develop this for other disorders, as well.”

Dr. Hays began his academic career at UT Austin as an aerospace engineer, but quickly realized biomedical engineering peaked his interest. “Biomedical engineering…really got me interest in approaching diseases related to human health.” As an undergraduate volunteer in a neuroscience lab, his fellow researchers were interested in his engineering background. He shared a humorous quip: “They said to me, ‘You’re an engineer. You know how to use tools and stuff’.”

Through an electrophysiology project—recording individual neurons—his assignment allowed him to apply both his engineering knowledge and budding neuroscience experience.

“From that,” he told us, “my interest grew in neuroscience and thankfully I was able to merge these things later on.”

A Robert G. Siekert New Investigator in Stroke Award winner, Dr. Hays did not begin his career with a focus on VNS. Still, similar to the Rangers, he was certain of his path. Graduate work involving a mouse model of autism fascinated him. He had excellent training and knew his interests related to human health research would be beneficial to society.

It was through his connection with other colleagues that led him to rediscover motor function recovery after a neurological injury and focus on translational research.

“I just kind of arrived there through a series of events—which is probably true for most people. You know, most faculty you talk to will have a pretty tortuous trip to get to where they’re going.”

Neuroplasticity, the scientific word for “brain plasticity”, refers to the brain’s ability to form new connections between neurons. In essence, it reorganizes itself. These changes in the brain can occur at any stage in life, but particularly in: early brain development, traumatic brain injury (TBI), or adulthood as we learn and memorize information.

“My research is mostly focused on using the ability of the brain to change,” Dr. Hays relayed to us. “We’re trying to…capitalize on that ability to drive changes in the brain that are beneficial to treat a variety of neurological disorders. Things from stroke to traumatic brain injuries to spinal cord and even things like tinnitus, and hopefully autism at one point.”

“My research is mostly focused on using the ability of the brain to change,” Dr. Hays informed us. “We’re trying to…capitalize on that ability to drive changes in the brain that are beneficial to treat a variety of neurological disorders. Things from stroke to traumatic brain injuries to spinal cord and even things like tinnitus, and hopefully autism at one point.”

Many neurological disorders manifest as difficulties in movement. Neurons affected from injury may become hyperactive, such as the case with phantom limb pain or tinnitus, or hypoactive, meaning the brain cells are not active enough. Dr. Hays predicts that the application of coupling VNS with rehabilitative therapy will be able to bolster motor improvement.

How does this work?

“We’re in the early stages of understanding how the reinforcement action works, but the way we think about it is that when you stimulate the VN it activates areas in the brain that release chemicals call neuromodulators. So neuromodulators are often released when we’re learning, when we’re engaged in something. We sort of co-opt that system by collectively stimulating it. Releasing those [neuromodulators] and what they’re doing is telling the brain that whatever is happening right now is important and you should remember that.”

Complicating his research, Dr. Hays states that the vast terrain of neuroscience is not largely understood.

He refers to it as a black box. “That’s really, I think, one of the more fascinating things about it.”

Like the Rangers, he utilizes his understanding of the world around him to solve these mystical black box problems; in his case, engineering. By examining each challenge as a system of components, he applies critical thinking to answer questions surrounding potential inputs and outputs to achieve breakthroughs. It was this strategy that led to a major discovery.

While investigating generalized recovery in stroke patients, he and his team set out to answer a series of inquiries. One in particular was to answer an important question for patients: Would VNS applied to one particular rehabilitative task generalize to another, similar task? The answer would allow patients to optimize rehabilitation time by targeting specific exercises that are beneficial.

“Conceptually, we believed that we would see this long-term plasticity, but we had not yet demonstrated that. So we had previously done some studies that showed if you applied VNS during rehabilitation that you could improve recovery—behavioral benefits that were able to better recover their motor functions, so arm functions after an injury. But we had not yet seen any evidence of what was happening at the level of neurons in the brain, so what we had seen is increases in the synaptic connectivity to the muscles that have been rehabilitated.”

“We were thrilled to see that the benefits generalized from training on one thing [applied] to training on similar tasks.”

One of the tools Dr. Hays and his team have developed allows patients to receive rehabilitative treatment at home. An app designed for tablets opens the door for VNS treatment to be assessed and monitored without imposing time constraints on patients.

“We’re developing some software tools, some hardware—just things that patients should be able to take home. Hopefully, it’ll be simple to manipulate and really be able to deliver more of the therapy to them.”

If you happen to run into Dr. Seth Hays outside of work, he’s not lost. An avid traveler who seeks interesting places to visit, he enjoys keeping a work-life balance. You may find him cycling on a trail, hunting down good food to eat, or searching for his next great cup of coffee.