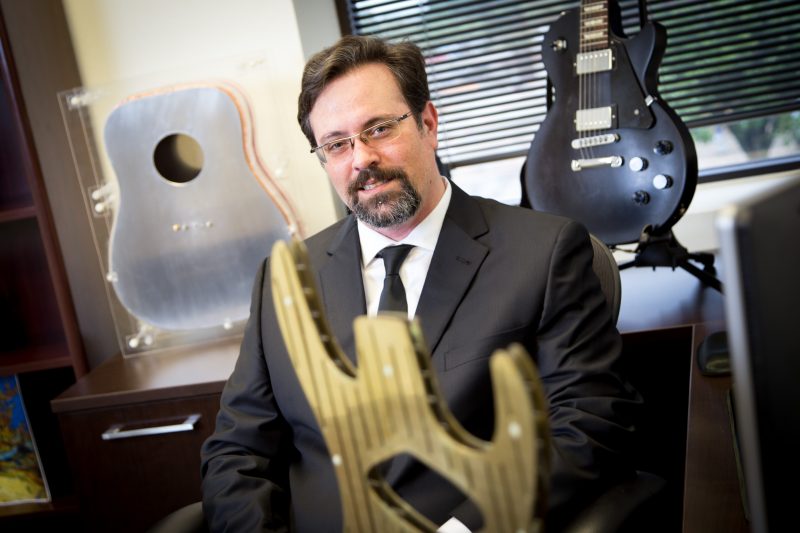 Dr. Stoneback is Rocking It: Light Guitar and Space Science

Dr. Russell Stoneback spent his childhood with lots of questions needing answers, developing an avid interest in the physical properties and phenomena of the world around him.

He went on to pursue those physics interests at UT Austin, where he also started playing music and supported himself by working in construction. That harmonious combination of skills encompasses a passion for building things, knowledge of the laws of physics, and a love of music, led Dr. Russell Stoneback, Assistant Professor of Physics at UT Dallas and member in the William B. Hanson Center for Space Sciences, to eventually see the light. Light Guitar, that is.

“Light Guitar is a new musical instrument that uses the resonance of electromagnetic waves to make music instead of soundwaves.”

What is a light guitar, and how did it come to be?

With an affinity for music and fervent curiosity in the way things work, Dr. Stoneback first built his own traditional electric guitar. After graduation, he took another look at this instrument. A normal guitar uses acoustic sound waves produced by strings. But could there be another way to deliver such sounds?

After all, light waves can oscillate and resonate, too. Dr. Stoneback explored how these electromagnetic (EM) light waves can amplify vocal sounds in a similar manner to sound waves. Combining this idea with his traditional guitar, he created a “light guitar” and submitted it for his Ph.D. dissertation at UT Dallas.

“Light Guitar is a new musical instrument that uses the resonance of electromagnetic waves to make music instead of soundwaves,” explains the professor. “It’s actually that resonance of electricity in the face of the guitar that produces the EM waves that resonate in the body and come out as music.”

But can this idea also be applied to more than music?

Besides the musical context, he has found evidence for the same EM resonance in space science, particularly the Earth’s Ionosphere and its interactions with the Sun. “I believe the fundamental electromagnetic structures present in the Earth and ionosphere are the same as those employed in the creation of the Light Guitar,” he says.

Ever blown over the tip of an empty bottle to produce sound? Dr. Stoneback has modeled the earth’s ionosphere as a conductive shell with holes at the magnetic poles. His models predict that as solar wind flows past the Earth it produces an EM resonance similar to that bottle’s acoustic resonance. Experiments used to understand EM musical instruments are the very same experiments that could be used to understand and constrain the applications of this system to space science.

In this way, Dr. Stoneback is hoping to gather data that will help us understand the complex system of space weather. He has worked with the Center for Space Sciences at UTD to develop tiny satellite instrumentation that can take extensive measurements of ion velocities in space. The software that he is developing to process that data uses the same workflows that he uses to process the digital music from his Light Guitar. For more information on this software check out his Python Satellite Data Analysis Toolkit, a simple and flexible interface for analyzing scientific measurements: pysat.

“I believe the fundamental electromagnetic structures present in the Earth and ionosphere are the same as those employed in the creation of the Light Guitar.”

As for his music, Dr. Stoneback is continuing to study the interactions between the elements of his new musical instruments. His prototype guitar is just the tip of the iceberg. He envisions that light pianos, light drums, and all-new instrument types can be created and shared with the world. He is setting up his lab space with half devoted to measuring the properties of these new EM musical instruments and the other half allocated to a recording/practice space to bring these new instruments to life.

Does the professor have any recommendations for someone wanting to break into research?

“You need a lot of persistence if you want to handle something new. Rejection along the way is okay. Be yourself as much as possible. If you’re going to do something different, and expend all that energy, then you need to do something that you are really passionate about.”