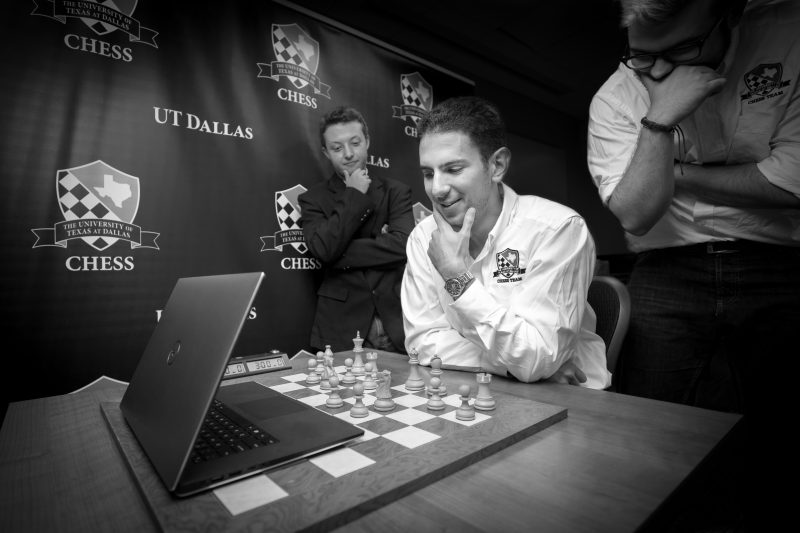 The University of Texas at Dallas’ Chess Team excelled at this year’s World Cup with Grandmaster Anton Kovalyov making it to Round 3, besting former world champion Viswanathan Anand in Round 2.  Performing at this level requires thousands of hours of preparation, evaluation, and position analysis, which in the ultra-competitive world of chess, has to quickly adapt to the raw power of ever faster super-computers.

“It is much easier to find the best move. With my computer, I need 20 minutes, but with the server I only need 2.”

The Office of Research worked with the UT Dallas Chess Team to establish two sixty-four core chess analysis servers capable of analyzing over 160 million moves per second. This system empowers the Chess Team members to prepare, plan, and evaluate positions in 1/20th of the time previously possible with laptop-based analysis.

“The main difference between a regular computer and a super-computer is depth, which is crucial for chess analysis to [analyze] as deep as possible.” said Zurabi Javakhadze IM. “It is much easier to find the best move. With my computer, I need 20 minutes, but with the server I only need 2.” reiterated Denis Kadric GM.

The Chess Team members are able to analyze at any time, from anywhere – even in the customary 30 minutes between games – providing a last minute opportunity, the advantage of which could be a new play, or how to counter act a new opponent.  While this analysis is possible on a laptop, the advantage is truly showcased in the depth of analysis.  Depth is the number of moves ahead that a current position is analyzed. For example, moving a Queen may seem like an advantageous move in the moment, but when preparing against an opponent who thinks 20-30 moves ahead, you could be in a very weak position by move 35. With the new power of the chess server, these moves can be analyzed.

To find more information on the Chess Team or the systems supporting them, email Michael Karich.