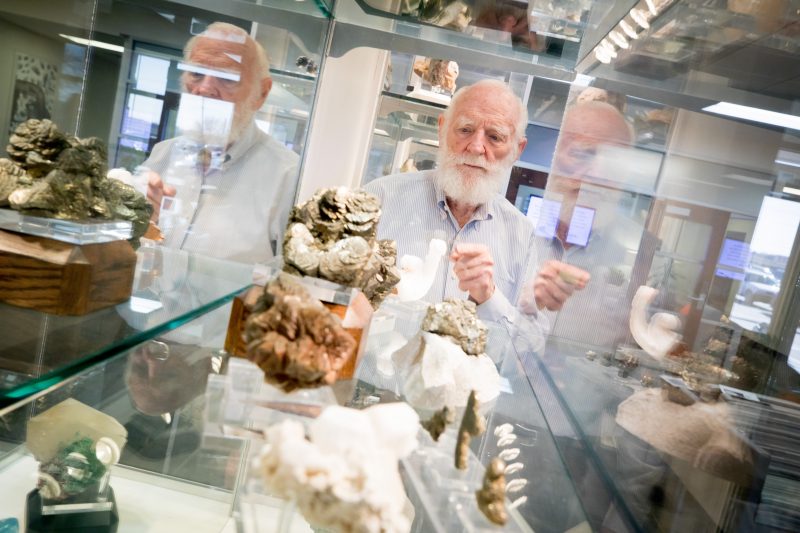 “Never Give Up, Never Quit”: Dr. James Carter is the Classic Student

It’s impossible to talk about the history of research at UT Dallas without mentioning associate professor emeritus of geoscience, Dr. James Carter. Recruited from Rice University in 1963, he arrived in 1964 as a senior researcher and is one of the early faces of both the Graduate Research Center of the Southwest (GRCSW) and Southwest Center for Advanced Studies (SCAS). A long-standing leader in both the Department of Geosciences and the development of the university, his intrigue with the world around him has led to a series of impressive scientific revelations, including ten articulated cervical vertebrae of the largest sauropod, Alamosaurus, which was discovered in Big Ben, Texas, and on display at the Perot Museum.

“It was heady times coming off the wars,” Dr. Carter told us about the early years of his research career. In a decade marked with civil and political unrest, he joined the Dallas academic community when a high-level research institution in Texas was still in the making and the future structure of the Founders Building existed mainly in blueprints. “They called it many different names,” he shared with a laugh, about what the emerging university would be called. “They finally wound up calling it the Southwest Center for Advanced Studies, which it certainly was and still is.”

The world was rapidly changing, as were the advancements in science. Before NASA’s remarkable success with the first human to walk on the moon, Dr. Carter played a part in training all of the Apollo crews in field geology. The combined efforts of Dr. Carter and the Apollo crews would allow for many feats; including the largest lunar sample ever collected, the Genesis Rock. Lunar regolith, or “moon dirt”, is studied in engineering and material science experiments to allow researchers opportunities to improve upon equipment and instruments that are utilized in space.

In the early Nineties, Dr. Carter, a world-renowned lunar geology expert, was contacted by NASA Johnson Space Center in Houston in an effort to create a lunar simulant that is chemically, mineralogically, and textually similar to the actual lunar material sample, known as JSC-1. JSC-1, named after NASA’s Johnson Space Center, is a “glass-rich basaltic ash which approximates the bulk chemical composition and minerology of some lunar soils”, according to a conference paper in which Dr. Carter contributed. Its creation will allow for continued, large-scale studies of human activity on the moon. Dr. Carter has created 52 tons so far and is the only manufacturer and supplier of both JSC-1 and JSC-1A. He also designed and built the unique mill used to manufacturer JSC-1A.

“Geosciences is a rather interesting science because it covers so much, it’s extremely broad and it’s always challenging.”

When asked if he had any idea that geoscience would take him on such a wide variety of opportunities in his career, Dr. Carter shared: “I’m a rather curious soul and everything intrigues me about science, math—and many other things. I never truly focused, everything was of interest—still is.”

His statement is easily true; while he retired in 2007 to make JSC-1A, Dr. Carter is still very much a part of the UT Dallas orbit. His interests have led to the preservation of research equipment built in the early years of the university’s development, sourced materials from the original Founders Building for a variety of projects, including a case used in the graduation ring ceremony, and is curator of the gem and mineral specimens at the Founders Building (FB) and Research Operations Center (ROC), of which he has made significant contributions.

Yet, despite his remarkable legacy, Dr. Carter makes his way daily through the halls at the ROC, exhibiting the inquisitive nature of an incoming student. Perhaps that is because he is currently undertaking two of his most interesting research projects yet: the study of silicified soft tissue and writing a book on the history of the UT Dallas time capsule.

Soft-tissue silicification, or preservation, is extremely rare. Through mineralization, bones and other hard parts of the body, such as teeth, can become chemically altered and the result is non-organic material, or a fossil. In the process of decomposition however, bacteria causes skin and other soft tissue parts to decay. Dr. Carter explains that this process often happens in a matter of days, or even hours. If microbes are unable to access an organism’s soft tissue – usually through freezing, amber preservation, or burial in anaerobic conditions, for example – organic material will remain unchanged and become fossilized. What makes his research particularly interesting is that the specimen Dr. Carter is studying belongs to that of a dolphin brain.

“Most of the things that are silicified are hard parts,” he tells us. “It’s a replacement process. This is something completely different.”

Dr. Carter believes he is close to figuring out how this occurred.

In addition to his research on silicified soft tissue, Dr. Carter’s book takes him back to the early years of UT Dallas’ history and a unique mystery: the time capsule.

“When Anton Hales took me out to see the future site of the Founders Building … he never mentioned the time capsule or took me to it’s place of insertion—there was a lot of construction under way. So, I was really surprised when I was asked [where] the time capsule was nearly fifty years later?”

Despite his long-standing presence on campus, he did not know. The time capsule, wanted for the 50th anniversary SCAS celebration on September 1, 2019, set Dr. Carter on a mission. Armed with half a century of experience, he began his journey to discover one of the most important artifacts of the university’s history.

“It’s been a long and sometimes difficult journey. It’s been now seven or eight years total of searching,” he shared. “People are going to be absolutely in awe of some of the stuff I’ve discovered about the early history of the SCAS.” The book details how Dr. Carter went about making the discovery. His biggest challenges? “Finding people who were at the ceremony and historical records,” to help him determine the process he would undertake in order to find the time capsule when no one knew where it was.

He aims to have his book completed next year for the semicentennial celebration.

“I recommend anybody at least take a course in geoscience. We live on the earth.”

Dr. Carter is the recipient of several awards and honors, including the James L. Carter Scholarship/Fellowship Fund. He enjoys reading in his pastime.

“It’s kinda hard to shut my little brain down, it’s going a mile a minute, so I’ll pick up something I want to read … I think reality, truth, what’s real is far more interesting than fiction. …It’s a total spectrum.”

Yet, on this day, Dr. Carter is neither a reader, nor asks questions. He has graduated from student to storyteller, sharing a history of experience with us as his students; his history, documented with the wide lens of a researcher’s mind. From his upbringing in South McAllen, Texas, on a small farm where he first began his collection of specimens, to the Christmas party where he met his future wife, he leaves us with one final lesson as students of life: “Keep searching for the truth. Never give up. Never quit.”