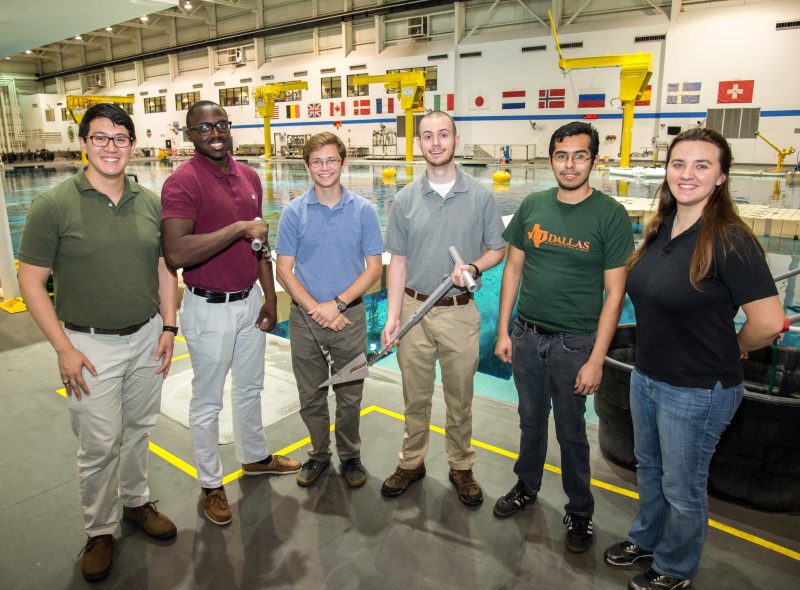 In early April, members of the Temoc Space Industries team at UT Dallas were busy at work designing an asteroid anchoring device for an educational competition hosted by NASA called Micro-g NExT. The team, made up of eight undergraduate students from various STEM disciplines, had a month to tweak their prototype design, the SCooping AsteRoid Anchor Borer (SCARAB), before heading to test it out at NASA’s Johnson Space Center. I caught up with team lead Craig Hartnell to see how their visit went.

You guys just recently got back from four days at the JSP. Besides testing your prototype, what else did you get to do?

We participated in a safety review, met astronauts Mike Massimino and David Wolf, listened to a presentation on NASA internships, did a poster session, and gave a final presentation. There was also a panel discussion on the journey to Mars presented by NASA and Lockheed Martin (prime contractor for the Orion spacecraft) engineers. We were given a behind the scenes tour of NASA, which took us to their VR Lab, the Lunar Sample Laboratory Facility (largest collection of lunar samples in the world), and Building 7 (where they work on and test spacesuits).

Did your SCARAB anchoring device perform as you had hoped at the NBL?

It actually performed better than expected; our design resisted one of the greatest amounts of pulling force.

What were some of the challenges you guys faced early on in the design phase that had to be worked out, if any?

Having to choose a design without really knowing how well it would perform due to budget and time restrictions. This resulted in us later having to redesign part of the tool so that it would insert more easily into the soil. Also, some of our simulations didn’t match up with our real-world testing. This never resulted in any failures, but did result in some loss of sleep.

We have to write the final report and start getting ready for next year.