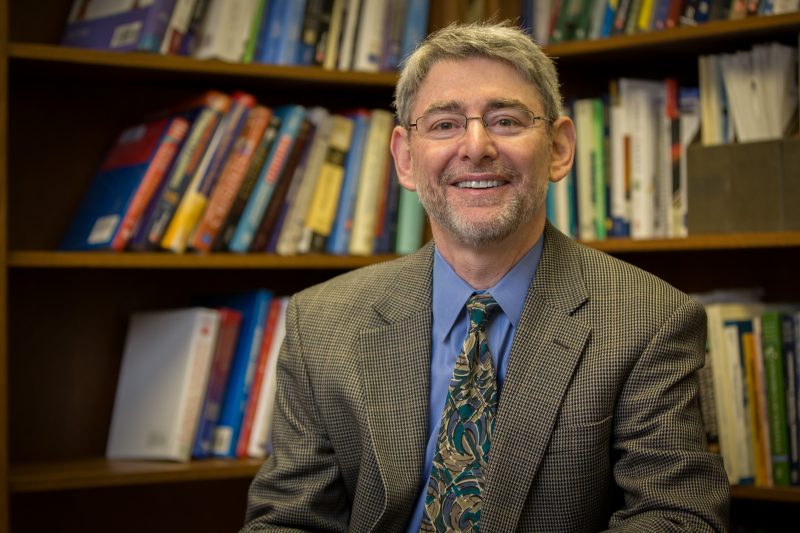 Q&A with Professor of Public Policy and NCAA Athletics Representative

Dr. Kurt Beron is a professor at the university’s School of Economic, Political and Policy Sciences. We recently met with Dr. Beron to discusses his latest research project and the work he’s doing with the NCAA. He will be the featured speaker at the Data Management, Ownership and Intellectual Property meeting to discuss responsible data management in research.

I have always been interested in having a better understanding of how and why people – particularly younger people – behave the way they do and how this behavior can be influenced. My interest developed along two dimensions. The first was focused on the actual process of people interacting with other people, such as the one-to-one interaction between caregivers and their clients. The second was understanding this process through more data-driven analytics.

I followed these threads through an undergraduate double-major in social work and economics, followed by a masters in social work and a Ph.D. in economics.  My Master of Social Work (MSW) entailed an internship at the national child support agency where I was exposed to the behind-the-scenes running of a federal bureaucracy. I followed this up with my Ph.D. dissertation that examined the economics of child support enforcement. This combination of a close-up view of people followed by a higher-level analysis of their interactions has been a thread through my research.

What is your current research focused on?

My interdisciplinary background has led me to a variety of research topics over the years spanning economics, education, sports, sociology, and psychology. I am currently the Senior Researcher in conducting a value-added analysis of Texas schools and school districts that ranks all schools and districts in terms of academic achievement of their students. I am a co-investigator on a multi-year NIH grant analyzing the psychological development of youth from grades 3 – 12. I have recently completed an analysis for the Dallas Central Appraisal District on the current condition of the residential housing market based on determining the average ratio of appraised to market value of single-family dwellings.

A relatively new area of research that I am working in relates to sports. I am teaching a sports economics class and have worked with the National Collegiate Athletic Association (NCAA) – see my post below. I have co-authored a paper, just published in Social Science Quarterly, that uses a unique data set of student athletes (SAs) across the country and across NCAA divisions. What most people think of when they think of collegiate athletics is what they see broadcasted, which is primarily NCAA Division I. We, among other things, looked at whether there were differences in SAs GPA that could be traced to their athletic identity and/or academic identity, the athletic context including the coach’s influence, and the seriousness with which they view academics. We found no evidence for two commonly-held beliefs: that the focus on athletics of DI SAs leads them to worse academic outcomes than SAs in the “less competitive” divisions, and that the athletic identity of male SAs has a greater impact on academic performance than female SAs.

I am currently trying to extend my sports research by analyzing how SAs compare to non-SAs from kindergarten all the way into the labor force. The process to even begin this research is in the earliest stages, but is very promising.

Public policy is a very broad subject. Studying “it” requires focusing in on an area you are interested in. This may lead you to a specific disciplinary degree such as economics or political science. Or it may lead you to a masters or Ph.D. in public policy. Regardless, and of course this is my own bias, in all these areas you will enhance your chances of succeeding by focusing on the empirical tools necessary for analysis. Take that extra applied course that’s offered – it may be what differentiates you from your peers.

How did you get involved with NCAA Management Council?

Every NCAA institution, regardless of division, has to have a Faculty Athletics Representative (FAR) designated that serves as the academic voice to the faculty and the president relating to athletics. I became UT Dallas’s FAR just after we joined the NCAA and for a number of years worked on campus and conference athletic policies.

My interest in research and my growing understanding of the NCAA as a national organization dovetailed with my being selected to the national NCAA Research Committee that oversees all research done by the NCAA across all divisions. I eventually chaired this committee. At the same time, I learned more about the specific division UT Dallas is in, Division III, which is the largest division within the NCAA with about 450 universities and 180,000 SAs. Division III (DIII) is overseen by the DIII Management Council, made up of 21 individuals with day jobs as university presidents, vice-presidents for student affairs, athletic directors, and faculty. I was elected to the council and became involved in all aspects of policy, planning, and budgeting.