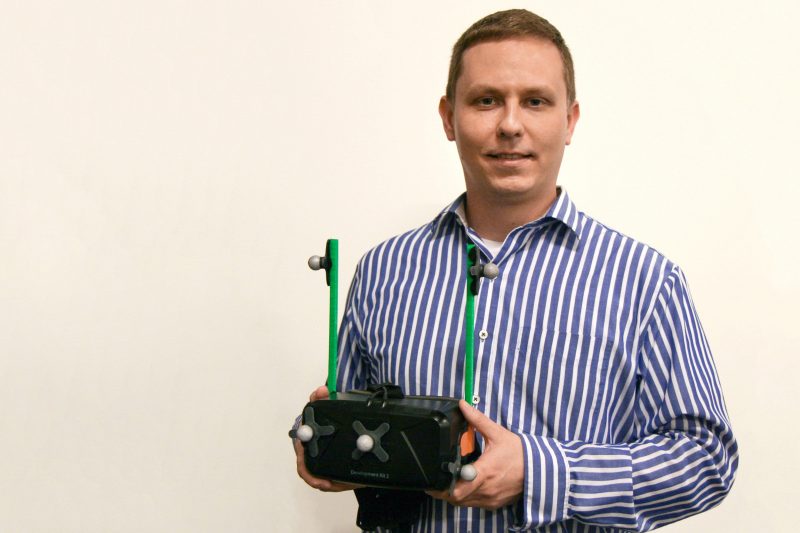 Dr. Ryan McMahan is an assistant professor in the Erik Jonsson School of Engineering and Computer Science and the School of Arts, Technology and Emerging Communications. His research focuses on the “effects of system fidelity for virtual reality (VR) applications and systems.” Recently, Dr. McMahan was awarded a National Science Foundation (NSF) CAREER Grant that will allow him to further his work on virtual reality as a means of training in the workplace.

In high school, I learned how to create mathematical programs on a Texas Instruments calculator for pre-calculus. It didn’t take long before I figured out that I could create text-based games using the same programming logic. I enjoyed the process so much that it naturally led me to computer science in college.

How has your research influenced your teaching?

I attempt to integrate aspects of my virtual reality (VR) research into every course that I teach. Because it is such a complex field, I can usually relate it to the course topics that I teach. Many students are excited to learn about VR, so this approach helps to keep them interested in the course topic at hand. Additionally, it exposes students to my research pursuits at the same time, which leads to some students becoming involved in my lab.

I truly appreciate the community that has evolved around the campus. On campus, UTD offers the feel of a small college despite having grown into a large university in the past decade. Around campus, companies and organizations are eager to work with UTD to improve the community, enhance education, and further research.

You were recently recognized during the annual Exhibition of Excellence in Undergraduate Research for your work as a faculty mentor. How did it feel to win this award?

Receiving the Provost’s Award for Faculty Excellence in Undergraduate Research Mentoring was an immense honor. Since joining UTD in Fall 2012, I have strived to involve undergraduate students with my research, as similar experiences eventually led me to obtaining my Ph.D. Watching my students pursue their own research passions and endeavors is very rewarding. Being recognized for my mentorship role amplifies those rewards tenfold.