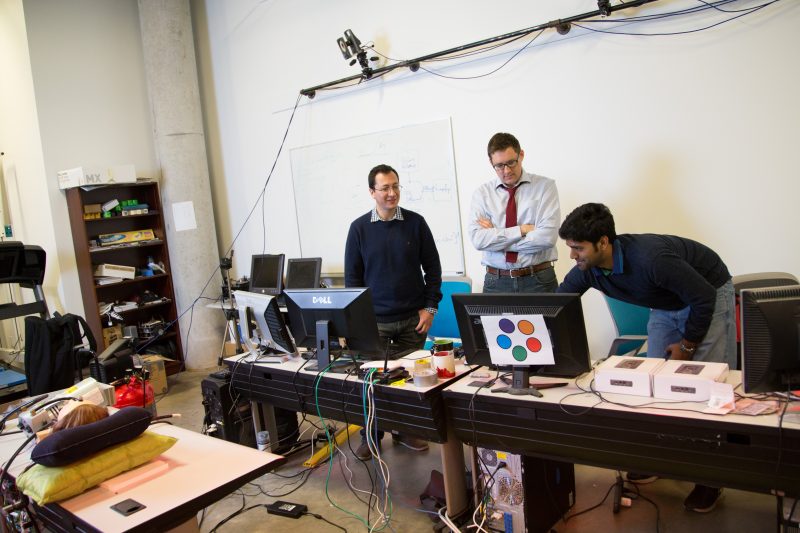 Romancing Tradition: Dr. Gans and the Future of Automation

The first roads didn’t belong to that of the Benz Patent-Motorwagen or Tin Lizzie – they belonged to the ships of ancient mariners.

In the spirit of the ancient mariners, the world’s love story with transportation and technology continues to propel us through the ages. Moving from ocean to land, one modern vessel – the automobile – is packed with innovations and utilizes principles established from the revolutionary successes of engineers such as Verbiest, Cugnot, Rivaz, Benz, and Ford. For instance, the internal combustion engine used by Rivaz to power the first automobile ranks sixth in Live Science’s top 10 inventions that changed the world. Research with global impact is exactly the love story that Dr. Nicholas Gans, Assistant Professor with the Department of Engineering, and his team are pursuing at UT Dallas.

It’s quite a ride.

In a culture that historically iconizes automobiles, it’s unsurprising that vehicle automation is at the forefront of the research race. With a series of diverse projects that utilize vision technology, Dr. Gans’ courtship with autonomous systems, robotics, and controls aims to bring the worldwide romance with automobiles further still into the future. Similar to Ford’s ideology on affordability, Dr. Gans’ interest in a cost-effective solution to automation speaks to his passion of ethical awareness in the use and distribution of robotics and technology. Economically-priced solutions remove global inequities regarding how technology is utilized, and by whom. Current automation relies on sonar, laser, and radar technologies which are expensive to produce. A solution? Cameras.

“It becomes very useful […] to use vision as an input for control of robots and vehicles,” Dr. Gans explained to us. “It’s a very rich data source. There is a lot of information that you can extract from vision.”

Vison-based control, or visual servoing (VS), utilizes vision sensors to extract feedback to automate the function of vehicles or robots, and the concept lies at the intersection of several fields of interdisciplinary research. Aerospace, Biomechanics, Computer Science, Electrical Engineering, and Mechanical Engineering are STEM fields that contribute in developing autonomous behavior, such as driver assistance. This includes, but is not limited to, cooperative control, sensor networks, motion planning, guidance and navigation, and imaging.

Cameras allow researchers to gather input from images to manipulate the degrees of freedom (DOF) of a vehicle, or robot. Information obtained and analyzed from these images, as well as the camera’s parameters, aids in determining the estimation of the desired target. Robotic and vehicle movement vary based on the task and lend themselves to the degree of manipulation required for successful deployment.

Essentially, cameras must not only “see” variables such as position, appearance, and the motion of objects nearby, they must do so accurately, predictably, and safely. As the human brain intrinsically makes these types of distinctions for drivers, computer vision techniques aim to do the same and are at one of the cores of automation research.

Why is Dr. Gans’ research critical to the future of transportation?

“It’s challenging though, because it’s […] a very noisy source,” he informed us. “There is a tremendous amount of information that is superfluous and unnecessary, so it’s difficult to winnow out what your system really needs to understand to operate correctly.”

Be it the reliable family Volvo or a Ferrari sportster, automobiles are synonymous with freedom. In America alone, 245 million registered vehicles were on the road in 2011, according to the U.S. Department of Transportation’s highway statistics. With an unparalleled place in pop culture – think James Dean and Paul Walker – America’s swoon over vehicular transportation isn’t all dreamy. The late David Bowie, for example, sung about always crashing in the same car.

When seas were open roads, there were no need for rearview mirrors, sudden lane changes, or airbags. However, Cugnot’s invention, Fardier a Vapeur, or steam dray, brought forth a new component in the world of automotives: the first “car” accident.

In 2011, 32,367 fatalities occurred on U.S. highways. According to the National Safety Council (NSC), nearly 100 people die in auto crashes every day and nearly 1,000 sustain injuries. The NSC’s reports show that the number one leading cause of death for children and young adults between the ages of five and twenty-four are car crashes, and the second cause of death for adults, aged twenty-five years and older. 1.3 million crashes a year can be attributed to distractions in vehicles, such as cell phone use, and the economic and societal burden of motor-vehicle accidents has expenditures that approach the billion-dollar mark.  These expenditures also encompass environmental factors, financial burdens, and the ultimate emotional impact.

To compare, only 489 fatalities occurred in civil aircraft that same year.

Automation of vehicles isn’t solely limited to self-driving. Avoidance technologies such as autobrake, adaptive headlights, and blind spot detection help drivers navigate our roadways more safely. Affordable automation technology increases manufacturing and productivity, therefore creating accessibly to the public, giving a means of safer transportation to the world. Also, in the industrial realm, robotics utilized in the manufacturing of automobiles and countless other items, rely on automation to complete specific and precise movements and adjustments. Many applications can benefit from automation technology including, security, defense, and space fields.

Dr. Gans is a member of the Institute of Electrical and Electronics Engineers (IEEE) Robotics and Automation Society Technical Committee and is highly interested in teaching engineering ethics. With a lengthy list of publications and patents, Dr. Gans is committed to providing knowledge to the Sensing Robotics Vision Controls and Estimation (SeRViCE) Lab for the Department of Electrical Engineering, as well as mentoring the UT Dallas Robot Chess Team.

“You got a fast car,” Tracy Chapman sang. “But is it fast enough so you can fly away?”  Perhaps one day. From ocean voyages, country drives, and road trips along the interstate, we and our vehicles have come a long way in our Sunday drives, Tin Lizzie.