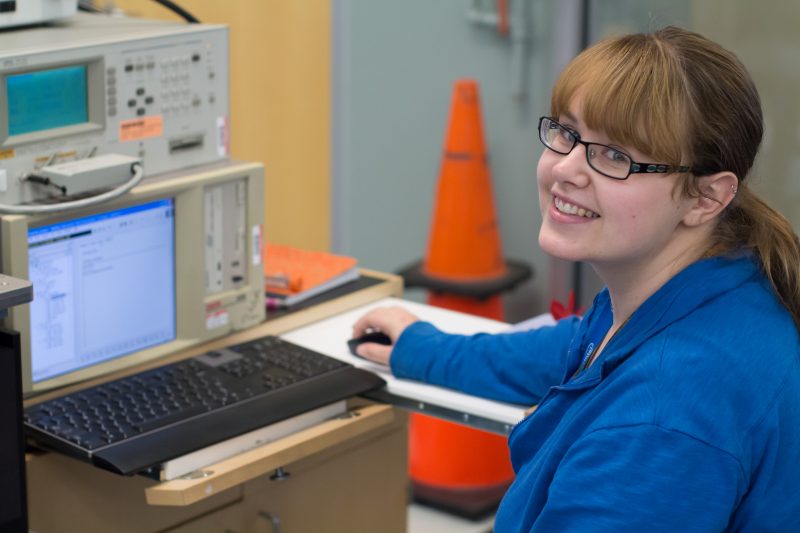 Safeguarding U.S. entry points has become one of the nation’s primary concerns post-9/11. While border patrol and lawmakers work to improve national security through legislature, researchers collaborate with government agencies, such as the Department of Homeland Security (DHS), to advance technology that protects our borders from potential terrorist activity.

Lindsey Smith, a fourth-year UT Dallas PhD student of Dr. Bruce Gnade, currently works alongside a team of researchers on a large-area radiation detection project funded by DHS. Lindsey’s focus on detection design and simulation, as well as sensor development, lends itself to solve the current border security dilemma DHS faces: a cost-effective system of detecting special nuclear materials (SNM) that could be transported across our nation’s borders. Similar to security screening at airports, the detection of nuclear materials in a large-area application would be implemented at border checkpoints. Individuals entering the country would pass through a tunnel-based detection system outfitted with multiple detectors in a semiconductor array.

But how does a tunnel system solve the issue of cost-effectiveness?

Drawing from her graduate work, Lindsey’s fondness for chemistry provides her knowledge of the relationships between atoms and their electrons, and how their chemical reactions affect everyday materials, such as semiconductors. Semiconductors, inexpensive in comparison to traditional radiation detectors, are placed inside of smaller, handheld detectors that Lindsey and her team are developing and will play a part in sensing radiation. A series of these detectors would then be arranged in an array inside of the tunnel to detect SNM.

With her background, Lindsey is able to alter crystal structures and atomic composition to better modify the semiconductor’s performance capabilities. When this science works and the detectors function correctly, these semiconductors can help keep our Nation safe.

Creating real-world, application-based science results in an industry-setting is not the only thing that appeals to Lindsey, who held a four-month internship at Intel this summer and currently works in the Cleanroom at the Natural Science and Engineering Research Laboratories (NSERL). As Treasurer of the local AVS: Science and Technology of Materials, Interfaces, and Processing (formerly American Vacuum Society) chapter in Dallas, Lindsey contributes to advancing the awareness of science-related disciplines, namely chemistry and technology development. After her upcoming graduation in August 2016, she hopes that her PhD will lead her to solving interesting and challenging problems at national labs.