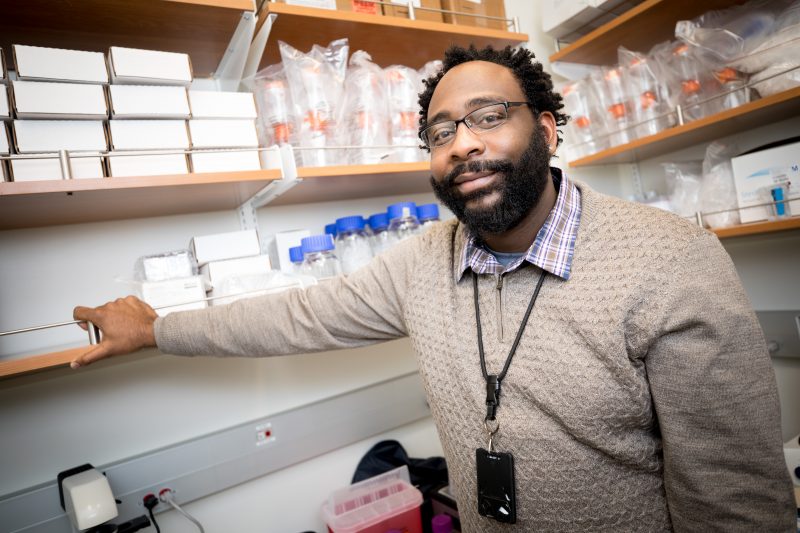 Upon meeting Dr. Michael Burton, assistant professor in the Department of Behavioral and Brain Sciences, you immediately know you’re in the presence of someone special. On first glance, he’s a gentle giant with an easy-going laugh, and his humble, Clark Kent-like identity is only the surface layer of a multifaceted character.

Like Kent who wields a reporter’s notebook and fights for the betterment of citizens, scientists are superheroes when you consider they work to save us from real-life supervillains — like pain — that originate from within our own bodies. Sans his lab coat, it’s clear that Dr. Burton, who runs the Neuroimmunology and Behavior Research Group, belongs to a subset of heroes who walk among us and don’t rely on superpowers. Instead, he utilizes his own natural abilities, instincts, and educational training, which led to his winning the prestigious K22 award from the National Institute of Neurological Disorders and Stroke (NINDS) — a superhuman step towards advancing his research in neuroscience.

“To have it and work on it, I’m truly humbled and excited to be here.”

It’s important to note that only one NINDS K22 grant is awarded each year and its highly competitive funding provides the necessary support for new investigators to advance their independent research. This is a major achievement that makes the transition for postdocs into faculty positions a reality.

“Winning the K22 was a very, very influential part of my life,” Dr. Burton shared with us. “To have it and work on it, I’m truly humbled and excited to be here.”

In the midst of flu season, his research is easily applicable to our daily lives. The nervous system, he explained to us, has to have a response to the immune system. Behavioral changes that you experience when battling a cold or the flu are an adaptive response. Social withdrawal and becoming lethargic, for example, are adaptive, natural responses, from the body.

The second part to his research is the maladaptive aspect.

“The research gets interesting where that adaptive response becomes maladaptive. Adaptive is a natural response from the body — to survive and adapt to our surroundings. Maladaptive is a little different.” Maladaptive responses, such as genetics or environmental factors can cause the immune systems of maladaptive individuals to become overactive. This means they can feel persistent or chronic symptoms — even after they no longer are physically ill.

Being a new faculty member and exploring his research yielded new discoveries in both his work and within himself. To his surprise, he learned that sexual dimorphism, or sex-specific differences, seem to appear in how both the male and female body interacts with the nervous system. While pain is the same for everyone, “The circuity,” he tells us, “is majorly and vastly different.”

And the discoveries within himself? Even Clark Kent returned to the Fortress of Solitude for soul-searching.

“Being in this position allows me to really, really learn a lot about myself. Yes, we all want to become professors, but we don’t know what that really means until we are here. You’re used to walking into the lab and just making the magic happen… you go in and you do work. And nope, now it’s you do work, write, you prepare, and you prepare them [students] to do work,” he shares.

The K22 award has allowed Dr. Burton not only the opportunity to pursue his research, but it has also given him deeper insight into the responsibilities faculty members face in the lab. Maintaining budgets and people are new additions to his skill set, including mentoring individuals interested in science, but not quite sure what their career paths will be.

He specifically enjoys helping people make the decision to become researchers, as well as developing his long-term goals of mentoring undergraduate students.

“Working with undergrads — especially I think — is really fruitful, because you have a certain energy level, a certain excitement to these students. They know what they are interested in – they are really, really untethered excitement.”

You don’t expect superheroes to be so down to earth, but in Dr. Burton’s free time, you will find he’s traded his lab coat for a chef’s hat. In proof that superheroes dream too, he enjoys discovering how different ingredients can create delicious meals people have never eaten before, and believes one day he would like to start a food truck business to share his culinary interests with the world.

In the words of Lois Lane, “What a super man.”