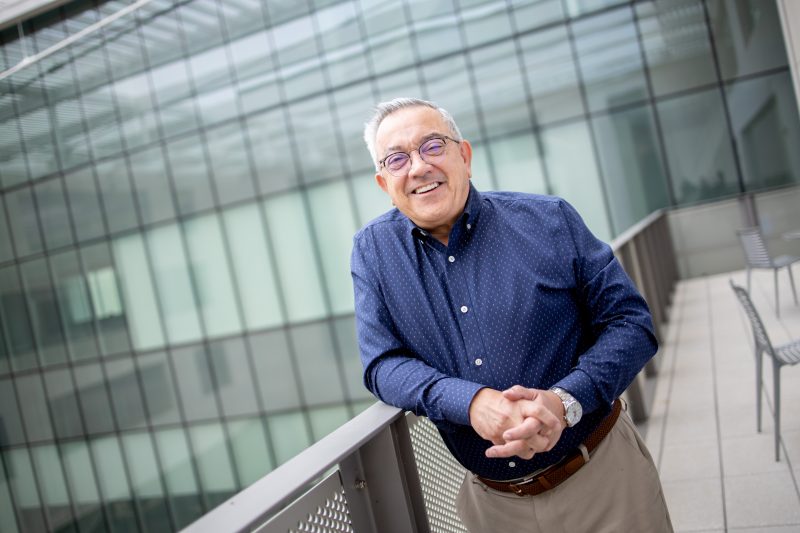 Dr. Mario Rotea is the Erik Jonsson Chair and Professor and Department Head of Mechanical Engineering at the University of Texas at Dallas. Dr. Rotea also serves as Director of UT Dallas’ WindSTAR Center. His research involves optimization and control of wind energy systems. Dr. Rotea took a beat to discuss why his research matters and the impact he hopes it will have on the community.

What is the problem that you’ve identified?

When you look at wind energy, every country in the world wants to increase the penetration of electricity from wind—and other resources of renewable energy—but wind in particular is what we do. In the US alone, the goal is to get to 400 GW of instilled capacity, providing approximately 35% of the electricity by 2050. To get there, we need to continue to reduce the cost of wind energy. The problem that we have identified is: how can engineering and research and development help reduce the costs of wind power?

In my particular case, the specific area is leveraging control systems. Which is how to best operate turbines and farms when they are performing in the real world. There are two key problems associated with the operation of wind turbines and wind farms. Wind farms need to produce as much power as they can, but if you don’t coordinate how the different turbines extract energy from the wind, you may not be getting everything that is available in the wind. In order to extract energy for a single wind turbine, we are trying to make them bigger and bigger, but there’s a limit. The limit is the amount of mechanical loading the structure can sustain. Controls systems can be used to alleviate that.

What are your solutions for these problems?

For the problem of facilitating the development of larger machines—larger wind turbines—what we do is bring controlled systems to the blades themselves. Think about an aircraft. The wings on an aircraft has surfaces that allows the aircraft to maneuver. Well, we can use similar surfaces. I have created these solutions to manipulate the flow around the blade in order to reduce the amount of the load that the wind creates on the blade. And how to synchronize that with the amount of power that needs to be produced is what we do.

What are some of the resources or laboratories here at UT Dallas that you use to test these scenarios?

We use computers and we use testing. The testing that we do is scale testing. We have a new wind tunnel that is about a year and a half old, that we can put wind turbines in, in order to determine how to coordinate the operation to maximize the extraction of power from the wind. We can also put in wind turbines to determine the effectiveness of the mechanisms that we put on blades in order to reduce mechanical loads. In fact, we’re also going to do such tests later this spring as part of a large project with ARPA-E (the Advanced Research Projects Agency-Energy).

On the computer side, what we do is we use high performance computing. Besides desktop computing for doing simple analysis, we use elaborate high-performance computing calculations to understand the flow. The flow in a wind farm is very complex. Seated in this area here, if you were to ask, ‘how is each little particle moving,’ that is a very difficult question to answer and requires very large computational capacity. These are not things that I do individually—we have teams; so, I don’t work in isolation. High-performance computing is done by one of my colleagues and the experiments in the wind tunnel by another colleague. So, we’re all working together. Faculty, students, postdocs, and industry leaders who collaborate with us to solve these problems.

What impact does your research have on society?

The research for wind power has one main goal: to reduce cost. What we have created at UTD is a strong team that can tackle different aspects of wind energy production in order to achieve that goal. When I say a team, this is a very complex problem; the atmosphere produces the wind, then machines extract the wind from whatever location they are at, then the mechanical energy is converted to electricity, and then the distribution of that energy. So, you have to have people in all these domains in order to provide an integrated solution. What we’re aiming for at UTD is to really become a center of excellence for wind power—a go-to place for industry and government to solve these types of problems.

In terms of impact—it’s huge. For example, Texas ranks number 1 in the country in terms of number of machines. We have about one-fourth of all the turbines in the US in Texas. In terms of installed power capacity, we have about a third of all the hundred gigawatts that are in the country, are here in Texas. Why is that? First of all, we have wind—there’s a lot of wind in West Texas—but there’s also a tremendous economic impact. Numbers taken from the American Wind Energy Association fact sheets paint the picture very clearly. In the state of Texas, over 70 million dollars is earned from leasing the land to the owners and operators of wind power.  The state collects 240 million dollars in state and local taxes from all the owners and local operators that are here. On top of that, about 25,000 to 26,000 jobs are associated with wind power in Texas. So, that impact is significant today and we hope to grow it.

What advice would you give to students looking to get into your area of research or your younger self?

The main advice for someone trying to get into wind power is to understand that this is a complex system. That it is not just one discipline that will lead to advancements. That you have to master something in order to contribute, but you need to have a conversation and understand what others are saying in a particular area of wind power. What I mean by this is: if I am a mechanical designer creating a blade, but I don’t understand the atmospheric flow of where that blade will have to perform, then I cannot design a good blade.